I'm finishing up another convention newspaper project here in Las Vegas and had an odd incident very early this morning. Things are going better this year than the last time I worked this show two years ago, and we're getting back from the printer at much "better" times, which is good because I've been running a fever and generally ill since getting to Nevada.

After L--- dropped me off at The Aladdin*, I stopped at the gift shop for a bottle of water and then headed to the elevators. Along the way, I passed a woman who suddenly stopped in front of me and said: "Wow."

I have a moment of panic: Is this someone I should know from the show, or someone I went to college or high school with?

"It's Abraham Lincoln," she said.† Pointing to my beard. "Yes. Yes, it is," I said. As I continued on to the elevators, she said, "You have to excuse me, I'm really drunk."

*Officially, it becomes Planet Hollywood Resort & Casino the morning after I check out, but there's so much PHRC branding that I was worried the cabby had dropped me off at the wrong place when I went to check in.

†Funnily enough, my youngest cousin labeled me "Abraham Lincoln with a ponytail and earring" during one of my trips home from college.
Posted by T. Carter at 22:16 No comments:

Celebrating A Year of Quinn

For a while now, Celeste has been good at recognizing letters. She's perfect with uppercase letters and decent, but not perfect, with lowercase; she also seems to get the concept of letters representing words which represent ideas and things.

When asked, she can spell dog and bus and a few other words — both vocally and using her blocks or foam letters. (For some reason, the almost always spells train T-R-N-A-I. This is interesting to me and makes me wonder about language acquisition and languages that don't write out vowels. I also wonder if the /eɪ/ diphthong is the issue. Or if it's just that Celeste is a two-year-old.) She can also read off letters from book covers, food labels, etc.

Yesterday, I took Celeste and Quinn to the thrift store to pick up some books; 40¢ for paperbacks that are likely to be chewed is a very good thing. Among the titles I grabbed was Dan Yaccarino's So Big!. I didn't say anything about the book to either of the girls; it just caught my eye and I added it to the pile. I did notice Celeste flipping through it in the cart however.

Later that afternoon, Celeste was having me read some of the books when she pointed at So Big! and said, "Daddy, read So Big!" Again, I had never told her the title of the book. I asked her if she knew the title because of the words on the book and she nodded and asked me to read it. I asked her to read me the letters on the cover and she did so perfectly, only stumbling over the exclamation point. "S-O-B-I-G ... I don't remember."

During a final proof for one of our magazines today, there was a two-deck headline on a column that read: "Where's the Fugawi / We're Here Now". Everyone was a little flummoxed by "fugawi," although there were the requisite namechecks of Fugazi. The term didn't appear in the column, and none of us at the table recognized. I asked the features editor if she'd googled it, and she said she hadn't. As I walked back to my desk to see if anything popped up, I thought of fugedaboudit and started playing with that /fʌːg/ sound in my mind and realized that fugawi corresponded all to well to "fuck are we."

It turns out, it's also the name of a brand of GPS software, which worked well with the headline, explaining the presence of the verb 's. At the same time, the Urban Dictionary's definition for the word matches up with the other meaning pretty well. The headline ended up being rewritten.
Posted by T. Carter at 17:07 No comments:

Email ThisBlogThis!Share to TwitterShare to FacebookShare to Pinterest
Labels: language

This afternoon, Celeste, Quinn and I listened to the Sawx's home opener. Considering how Beckett was pitching and how most everyone who was not a Mariner was hitting, there was a lot of clapping and cheering and happy dancing ... and quizzical looks from Celeste and Quinn.

Celeste, however, is starting to get it. She joined in the "Go Red Sox!" cheers several times and didn't argue when I insisted we replace "home team" with "Red Sox" while singing "Take Me out to the Ball Game"*.

She then turned and asked Evelin: "Mumma, do you know those words?"

*The Hold Steady's version of "Take Me Out to the Ball Game" (free MP3 download via Spinner) is quite nice ... if only they weren't Twins fans ...
Posted by T. Carter at 22:04 No comments:

The Newest Member of Our Family ... 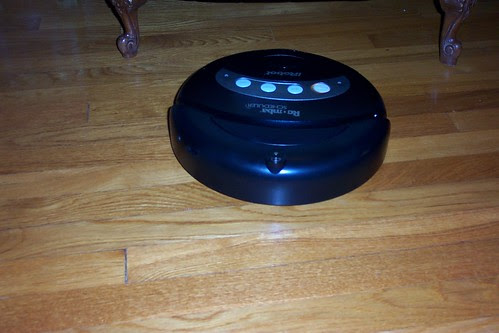 I don't think it will help Celeste get over her fear of vacuum cleaners, but our new Roomba Scheduler arrived yesterday and got its first test spin this morning. The battery wasn't fully seated in the unit, and it didn't get the full 16-hour refresh charge it needed, so it only ran for about a half-hour, but it was pretty cool. (And we've been telling Celeste it's a dog cleaning robot — if we give her a dog-related frame of reference for things, she's less likely to object to them, ergo, when Evelin added green beans to Celeste's soup last night initially she didn't want them, but when she was told they were poodle tails, she ate them all up.)

Celeste was okay with Roomba so long as she was watching it from the couch. Quinn kept a very close eye on it, doing a little shadowing and pointing, but she didn't want to get too close.
Posted by T. Carter at 08:23 No comments: