Today's lesson in not making assumptions ...

I stopped in to D.C. Sandwich to pick up two banh mí for lunch (one đậu hủ chay and one bì chay) and had a brief moment of concern when the order ticket was written with a note that looked (to my inexpert eye) like hangul at the bottom. Should I be concerned about the authenticity of the sandwiches? (And really, what does "authenticity" mean or matter when you're talking about a really tasty sandwich?)

I'd asked for no hot peppers on the banh mí, and from the context that would seem to explain the writing. However, I couldn't figure out what the characters were; 으아 was as close as I could get, but that makes no sense and there appeared to be another stroke or two in 아, like a poorly formed/out of proportion 감 or something. (Google Translate renders 으아 as "whoa" ... which I guess could mean "no jalapeños," but that would be some really odd diner slang. 오감 is "five senses," which would seem to be a request for more heat, not less.)

Flipping through a dictionary and Google Translate, I couldn't find any rendering of capsicum (고추류) or jalapeño (할라페뇨) or something similar in Korean that it might be the equivalent of hot pepper. Then I looked at Vietnamese words for hot peppers, wondering if it were a hangul rendering of a Vietnamese word, and came across ớt ... and then pretty quickly realized my mistake ... the first character wasn't 으 or 오 or 우 or anything similar, it was an underlined zero — 0 ớt. 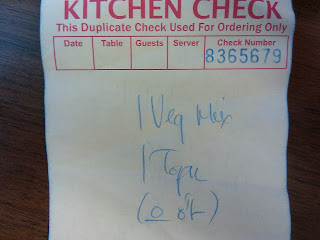 Email ThisBlogThis!Share to TwitterShare to FacebookShare to Pinterest
Labels: food

It's been seven years since I was a behavior watch volunteer at the zoo. I had to experience all the excitement surrounding the arrival (and departure) of 太山 — Tài Shān, fondly known as 黄油条 (buttersick) — over the fence as a regular visitor to the zoo instead of through the behavior watch camera lenses.

Despite not being there twice a month, I do pay attention when I see mentions of 美香 (Měi Xāng) and 添添 (Tiān Tiān). So imagine my surprise to get an email from Moray Firth Radio offering the chance to win a panda mask:

What‽ 添添 is going to leave D.C. to shack up with some other Ailuropoda melanoleuca?

Thankfully that turns out not to be the case. The Tian Tian who now calls Edinburgh her home (at least until 2021) is eight-year-old 甜甜 (Tián Tián) with a rising tone (2) instead of the level (1) tone in添添. Her partner is eight-year-old male 阳光 (Yáng Guāng). It does mean, however, that http://en.wikipedia.org/wiki/Tian_Tian_(giant_panda) is going to need a disambiguation page soon.
Posted by T. Carter at 11:58 No comments: