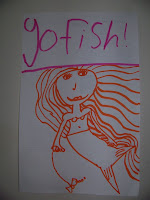 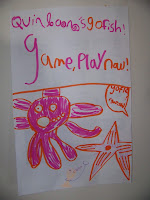 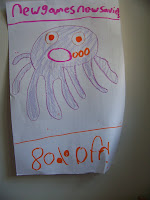 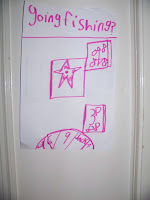 In general, Q doesn't like playing games; the one exception over the years has been Go Fish, although we not too long ago picked up Apples to Apples, and she's loved it. Despite that, she's had a long-standing aversion to "winning games." Instead she usually likes to play Calvinballesque card games where the rules constantly change to ensure that everyone playing is doing well.

Now, Quinlan has branched out into game design with her own version of Go Fish. Using some of my old business cards and the calling cards we had printed up for her a while back, she designed a mermaid-themed deck with numbers 1 through 13, as well as Jack, Queen, and King. There's only one pair of each, which can make the game move quickly. The rules follow the traditional ask for card and draw if you don't get it, but the best bit is the marketing. It didn't quite click with me when I noticed the image at the left that it was an ad for the game, but this morning I found the three other posters placed strategically around the house. 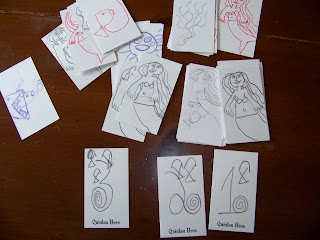 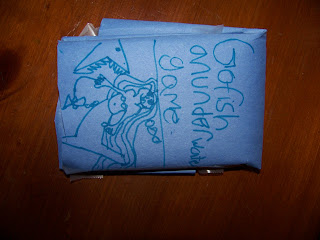 Beyond the posters, there's also the titling of the game — "Go Fish: An Underwater Game" — and the little touches in the card images, from the swirly numbers and the fish as pips on the cards to the little fish the mermaid keeps on a leash and the bubbles coming from the octopus.
Posted by T. Carter at 11:56 No comments: